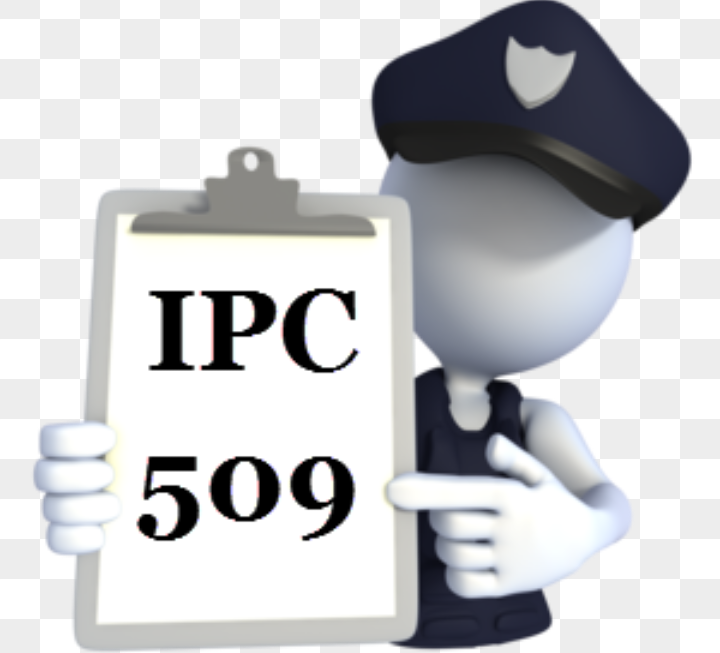 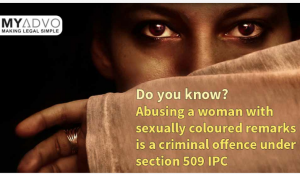 This section is basically to protect the women from word, gesture or act intended to insult the modesty of a woman.now this section provides that whoever, intending to insult the modesty of any woman, utters any word, makes any sound or gesture, or exhibits any object, intending that such word or sound shall be heard, or that such gesture or object shall be seen, by such woman, or intrudes upon the privacy of such woman, shall be punished with simple imprisonment for a term which may extend to one year, or with fine, or with both.
The basic ingredient of section
1. The accused uttered some words, or made some sounds or gesture or exhibited any object or intruded upon the privacy of a woman
2. The accused must have intended that the words so uttered or the sound or gesture so made or the object so exhibited should be heard or seen respectively by the woman
3. The accused thereby intended to insult the modesty of the woman.

This section can understand more accurately with the cases below mentioned -;
J. Jaishankar vs The Government Of India & Anr on 14 August, 19 -The court observed that the conviction of the petitioner for an offence under Section 509, IPC had attained finality, it undoubtedly involves moral turpitude as it is impermissible for such an employee to continue in service. When a Government servant is dismissed from service on conviction by a criminal Court involving moral turpitude, it automatically leads to removal from service, without further enquiry. Can a worker be put at a higher pedestal than as the Government servant? The obvious answer is ‘No’. In view of the conviction for moral turpitude of the petitioner and due to conviction for an offence under Section 509 IPC, the order of dismissal was rightly passed The recommendation made by this Court was made after noticing the trivial offences like traffic offences, municipal offences and other petty offences under the IPC which do not involve moral turpitude. This Court recommended to the Parliament to step in and make necessary alteration in law so that consequence of the conviction and sentence would suitably be modulated and mitigated in the light of the judgment. That ratio is clearly inapplicable to the facts of this case.
S. Khushboo vs Kanniammal & Anr on 28 April, 2010-In this case it the opinion of the court Section 509 IPC criminalises a `word, gesture or act intended to insult the modesty of a woman’ and in order to establish this offence it is necessary to show that the modesty of a particular woman or a readily identifiable group of women has been insulted by a spoken word, gesture or physical act. Clearly this offence cannot be made out when the complainants’ grievance is with the publication of what the appellant had stated in a written form
According to today perspective we observe that this section have played a major role in women misusing the law which were for their protection as this section is to be read with others sections also like sec354,354a,354b,354c,354d or 375(a to e ).the various section of women are misusing these section which ultimately led to disruption of the men life . Today we observe that the laws which were made for the protection of the women of the are used by those who are using it as tool of harssing the oher party and the most of cases are are fake cases .Acc to report it said that these fake cases lead to disruption of other party . For eg A father is aged close to 64 years and is in a bitter battle with his brother over Probate of their father’s will which matter is in the High Court. . Both brothers have offices in same basement. To harass A father, his brother sent his employees to my father’s office, including a female employee, to fight with my father and after a verbal altercation called the Police and has now got a case registered against my father under section 509 – Outraging the modesty of a woman – on the grounds that he allegedly used the words “Stupid woman” and “Bitch”. The entire episode was on CCTV Camera and A father is sitting on his chair behind his table while the entire staff of his brother including the woman is standing across him and shouting at him. Now here question arise that
who is at fault the women or the law which is protecting the lies of women , so the ans to the question to question is that the laws we finds today are gender biased because the country india in past yrs was a patricah society which tend to dominate the females section and in order to protect them ,the laws came to being but now with change of time the the laws for the benefit is used wrongly .Now there is need of the legislature to come with some changes in order to protect the non guilty because he faced with the circumstances like
1 Disown from society ,
2 Job is lost
3 Even though he is acqiuitted by law he is seen as offender
These are very common problem as sometimes these led to build up mental trauma on him and need to be put in spotlight