After the Abhinandan incidence, it seems that Pakistan is still obsessed with pilots and is unable to get over that situation. Recently, a Pakistani minister from the Imran Khan government embarrassed himself. He posted a simulated video of GTA V game on his Twitter handle, claiming it to be real life incident. He also praised extra-ordinary  skills of the pilot for avoiding clash between the aircraft and an oil tanker. 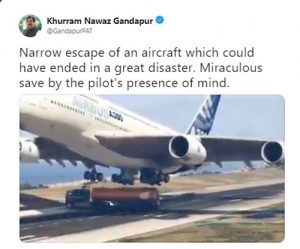 This post landed him in the middle of trolls and memes, though he deleted the tweet later on. Namaz Gandapur, an ex-Omani cricketer who now serves as a Pakistani minister confuses the animated video with real situation. He not only stops here, but goes a step ahead to appreciate the pilot for his presence of mind to stop the collision. The video depicted an Airbus A380 flying over a city while truck is crossing the runway. Anybody, who isn’t familiar with GTA V could also predict that it is a simulated clip. .

Such goof-ups are not new to Pakistan. Recently, a hilarious situation took place when an anchor of Pakistani news channel made a blunder by confusing tech company ‘Apple’ with a fruit.  Later a correction by the guest sorted out the anchor’s uncertainty. Jokes and crazy lines surrounded Pakistan’s media and yet again lethargic attitude of its Journalists came to limelight. Another situation that grabbed attention was the use of cat filter in Pakistan minister’s live press conference and how the minister became a subject of humour.