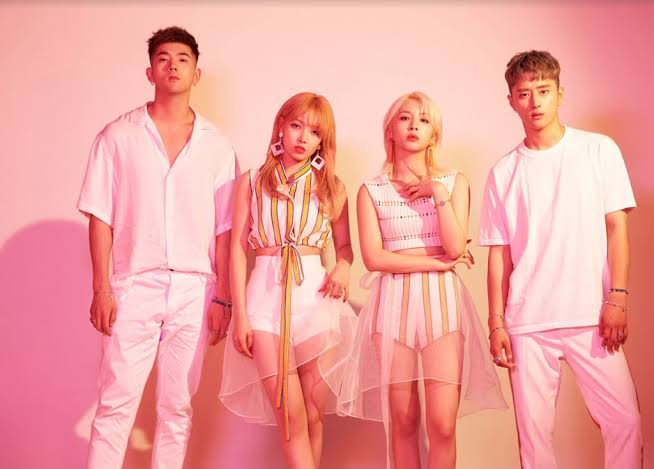 That the world has become a global village is quite evident. And the fact that people are interested in learning the cultures of different countries on another level is no joke, either. And in this massive globalization surge, the most significant one in the past few years has been the KPop Wave.

KPop, short for Korean Pop, has been around for a while. But India took it’s sweet time to warm up to it. Nevertheless, the fad is here to stay. And the Korean Culture Centre has taken advantage of this, and has been organizing a number of events for KPoppers across the country. Though bands such as BTS And BlackPink are magnanimous hits, a number of other bands have been grabbng eyeballs at concerts as well. The most recent one, and the only one fearuring a mainstream band, was held at Delhi on the 12th, and at Guwahati on the 14th. 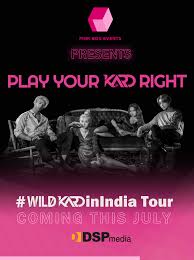 The KPop group KARD, which consists of 4 members (boys and girls, 2 each), has been the third group to perform this year. A few months ago, the bands VAV and In2It held concerts in India too. Apparently, the Centre had been trying to get the co-ed band to hit India on their ‘Play Your KARD Right’ Tour, but had been let down. However, they finally succeeded, and the result was a memorable evening for thousands of fans.

The Delhi Concert was held at Talkatora Indoor Stadium on Friday. The event began around 12 noon, with a fanmeet, followed by the concert at 5pm. The tickets were placed in 2 categories, namely Scouted (Rs. 1800), which only ensured entry, and Rookie (Rs. 7000) which had perks such as posters and albums. Morever, there were other events such as the High-Touch (a High-Five from the band), and a Photo-op, at Rs. 1000 each. 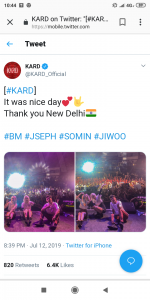 The entry for the concert began around 4pm, and saw a number of dignitaries from the South Korean Embassy as well. The group members, BM, J-Seph, Somin, and Jiwoo, performed their hit tracks Oh Na Na, Don’t Recall, and Bomb Bomb, amongst others. They also interacted with fans and played games, gifting signed albums to winners. They revealed that this was their first time in India, and said that this was one of the best concerts they’d ever held. The members also sang and danced to a few Bollywood numbers, in addition to performing a hit song, Mi Gente.

The event was held by Pink Box events in association with the Culture Centre. According to reports, fans flew in from all parts of the country, including the North-East and South. The group began their introductions with a traditional Namaste, and then proceeded to converse with fans. Due to English not being their first language (except for BM, who is fluent), an interpreter was present to enhance the communication. However, he did face some problems hearing the members above the shouts of fans.

The group also held an encore, where the fans were allowed to flock the stage while the group perfomed. This was followed by the members clicking pictures with the crowd and thanking the management. The event team also planned a surprise for the band, which involved them playing a video featuring fans from all states welcoming the quartet to India.

The event concluded around 7:30pm, with the band promising to come back during their next tour, and asking fans to come back too. Finally, the Head of the Culture Centre was honored and feliciated. 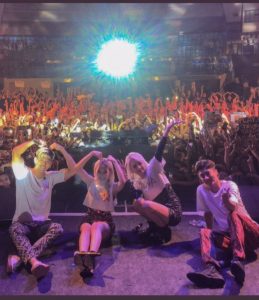 The news of the band’s performance came out in June, and had created a major buzz on Twitter and Facebook. The fans were really glad to have the band perform, and are hopeful that their arrival will herald tour stops by bigger bands in the future. Likewise, the group also seemed to thoroughly enjoy their maiden Indian tour, and expressed wishes to try out Indian food and visit tourist sites.

Pink Box Events later said that they were happy the event turned out well, and plan to extend their reach further in the future, by inviting more high-end groups to the country.