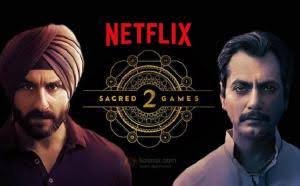 The second series of the most awaited series of netflix originals has released. The first series started on 6 july last year and now 15 August is the release date of the second season. This new season of sacred games will be more interesting than before as said by Saif Ali khan and Nawazuddin Siddique. The episodes are shot in Kenya, Cape town and Johannesburg.

The trailer starts with the character ganesh gaitonde who appears again and Sartaj Singh looks for more ideas to compete with the increasing crime rates in mumbai. Trailer also introduces Ranveer shorey (Shahid Khan) and Kalki Kochlin as Batya Abelman. They will play a key role in the new series. Pankaj Tripathi will play a role of mysterious guruji as shown in the trailer. One of his dialogue is already famous in internet- ” balidaan dena hoga” and is favourite for memes. Nawazuddin Siddique revealed that guruji played a crucial role in his life and therefore “balidaan” will Play a huge impact in second season.

The series received unanimously positive reviews. Special applause was given to Nawazuddin Siddique and ganesh gaitonde for their acting.

Directed by Anurag Kashyap and Vikramaditya Motwane this netflix originals has touched the sky.

The release date will be the independence day-15 August, 2019.