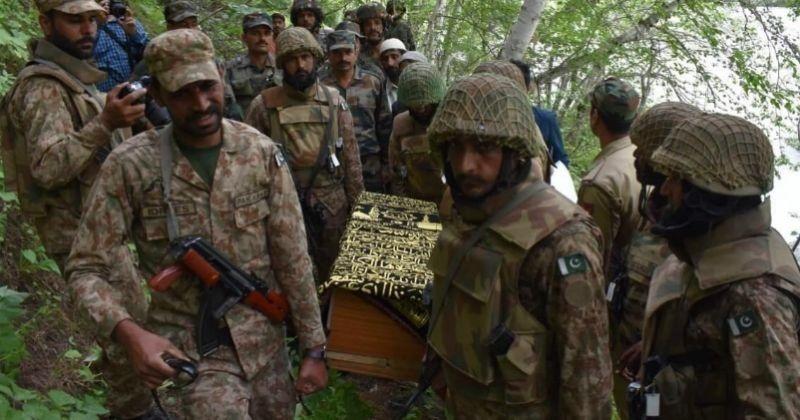 In a humanitarian gesture, The Indian Army breaks protocol and  handed over the body of a drowned child to Pakistan after he had fallen into a river.

Handing over of mortal remains of the POK boy in Gurez Sector by the Indian authorities to the Pakistani Army with full respect and religious rites. #Humanity, #Kashmir, #IndianArmy @NorthernComd_IA @adgpi @Whiteknight_IA @easterncomd pic.twitter.com/76r4vWj81O

The body of the seven-year-old boy was retrieved from Kishanganga River in north-western part of Jammu and Kashmir by Indian Army troops in Gurez sector yesterday. The boy was drowned in Minimarg area of Gilgit-Baltistan in Pakistan-occupied Kashmir and floated down across the border. It turned out that the boy identified as Aabid Ahmad Sheikh was missing since Monday and had accidentally drowned in the river.

The boy’s body was handed over to Pakistan as soon as it was recovered at Dudgai post in Chorwan area of the LoC.

“The Army acted after Pakistani authorities flagged the issue of sending back Sheikh’s body. But it was an emotive appeal by the boy’s father and uncles on social media that prompted the Army to act swiftly.”

Protocol dictates that in such a case, two parties must establish meeting points. However, in the light of the sensitive matter, the Indian Army offered to hand over the child’s body to Pakistan at Gurez itself.

“I am seeing such an exchange for the first time in my life,” said Nazir Ahmad Gurezi, a former MLA from Gurez, where the body was handed over.

It was on Tuesday that some residents of Achoora spotted the body floating down the Kishanganga river. Within hours, they came across a photo of a “missing child” on a Facebook page from Minimarg Astoor village in Pakistan-occupied Kashmir’s Gilgit-Baltistan. Then, they saw a video on social media of a distraught family from PoK appealing for the return of their son, Aabid, who had gone missing on Monday.

“As soon we came to know about it, we approached the Army and asked them to take up the matter with their counterparts across the border,” Bandipora Deputy Commissioner, Shabhaz Mirza, told The Indian Express.

The Indian Army preserved the body in ice blocks carved out from the mountainside and reportedly, the Indian team went through a minefield maze to the Line of Control.
At this gesture, an army officer added,

“This time, instead of returning it through official exchange points like Teetwal, we did so in the same area so that the mortal remains do not get decomposed…it was a humanitarian gesture.”

The Twitter Also Flooded With Same Humane Gestures To Army :

Insaniyat ki behtareen misaal. Pakistan ?? should learn from India ?? how to honour the dignity of human lives. Still remember pics of Kargil war

The neighbour is our enemy but the child who died was an innocent.

Thank you @adgpi for this noble and humane act. Proud of our moral Indian Army. Always.